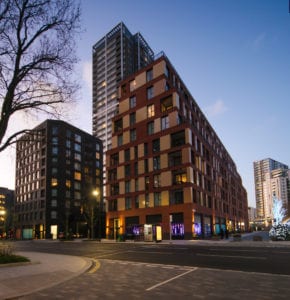 HE Simm’s involvement in the scheme began at Trafalgar Place (£3.9m), a 235-apartment MEP fit-out project, completed in 2015.  The successful delivery of the fit-out scheme resulted in our selection for the design & build MEP services at MP2 H2 (£15.2m), which comprised of three nine-storey blocks and a 30-storey tower containing 367 apartments. 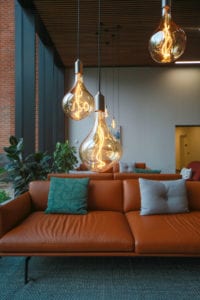 Elephant Park is to be London’s ‘green new heart’ and so we installed 150m2 of photovoltaic panels across all four blocks.  We developed a very close relationship with Lendlease, collaborating in a number of ways, including changing a traditional copper cold-water system to stainless-steel, reducing the weight of the system by a third.  We also elected to manufacture 80% of mechanical shell & core pipework offsite, drawing on the associated cost, safety and time-saving benefits. 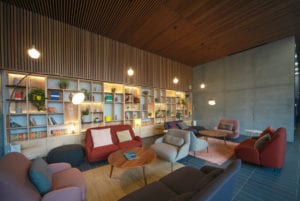 MP2 was a huge success for both HE Simm and Lendlease, so much so, that we were  selected to deliver MP3 H5.

From the trust that has been developed over the last two projects, we were given the opportunity to engage with Lendlease, their Architects and Structural Engineers to take the stage 3 AECOM design through to stage 5, incorporating all the lessons learned along the way.  This was the first time an MEP package had been procured this way on Elephant Park and its success quickly became the benchmark for future phases.  The early engagement has allowed us to further explore prefabrication methods that were not possible previously, such as bathroom pods, which will be installed throughout the scheme.